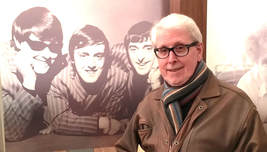 John Carter was born in Birmingham in 1940. His family were not professional musicians but were all enthusiastic amateurs singing folksongs at family gatherings and in pubs. John eventually formed a skiffle band while still at school and taught himself acoustic guitar and began songwriting, inspired by Buddy Holly.

In 1959 together with his school friend and co-writer, Ken Lewis, John started to write songs in his spare time. His songs began to get known in Denmark Street (Tin Pan Alley). John signed to peermusic as an exclusive songwriter and co-wrote “Will I What?” for Mike Sarneas as his follow up to “Come Outside”. Meanwhile, he and Ken were busy demo-ing songs for other writers, doing backing vocals and performing for the BBC (“Easy Beat” and “Saturday Club”) as Carter-Lewis & The Southerners.

Their first UK hit was a song by Mitch Murray (“Your Mama’s Out Of Town”), which got to No. 20 in the NME charts in 1963. Their backing group consisted of Jimmy Page and Viv Prince, among others, and they toured with Duane Eddy, Gene Vincent & The Shirelles. The band split in 1965, and John concentrated on writing and providing backing vocals on other artists’ sessions. He had songs recorded by John Leyton, P J Proby, The Fourmost and sang on “Out Of Time” for Chris Farlowe, Sandy Shaw’s “Always Something There To Remind Me”, Tom Jones “It’s Not Unusual” and The Who’s “I Can’t Explain”.

John and Ken brought in Perry Ford as a third member of their vocal backing team and combined writing and recording as The Ivy League for Pye Records. They had hits such as “Funny How Love Can Be” and “Tossing And Turning”. Preferring writing and producing to touring, John left the Ivy League in 1966 and continued writing hits for other artists such as Manfred Mann (“Semi—detached Suburban Mr James”, and Herman’s Hermits (“My Sentimental Friend”, “Sunshine Girl”) and their US No. 1 “Can’t You Hear My Heartbeat”

He formed The Flowerpot Men with Ken in 1967 and wrote, produced and sang on the worldwide hit “Let’s Go To San Francisco”. Further hits included an American No. 1, “Little Bit O’ Soul” for Music Explosion, “Peekaboo” for The New Vaudeville Band (having sung lead vocal on their hit “Winchester Cathedral”), Sleepy Joe” (Herman’s Hermits), “Is It True” (Brenda Lee), “Sunday For Tea” (Peter and Gordon). He also wrote the 1970 British Eurovision entry “Knock, Knock, who’s There” for Mary Hopkin, which came second, and was another worldwide success.

From the early seventies, John combined writing hundreds of successful television commercials for British and European clients and writing and producing records with his lyricist wife, Gill. Their early successes together were the Kincade hits “Dreams Are Ten A Penny”, “Do You Remember Marilyn”, “How Can I Fly”, “Big Hand For Annie” and several albums charting in Europe and Scandinavia. John’s other work with Gill included writing and producing the US and UK hit “Beach Baby” for First Class, with follow-up singles and three albums. The hit also charted in Europe, Australia and South Africa.

In the mid-eighties, john founded his own independent Sunny Records label and released several singles, written and produced by him and also bringing in outside recording talent. John served on the Council of the British Academy of Composers and songwriters and the council as a writer-member of the Performing Right Society.

He currently runs with Gill, his own publishing company and record production company, which concentrates on compiling and promoting his enormous back-catalogue of songs and records and has teamed up with a Brazilian friend, Salomao Hamzem to write songs and recorded under the name of Hamzter. They have released three albums and are in the process of writing and recording the fourth album.